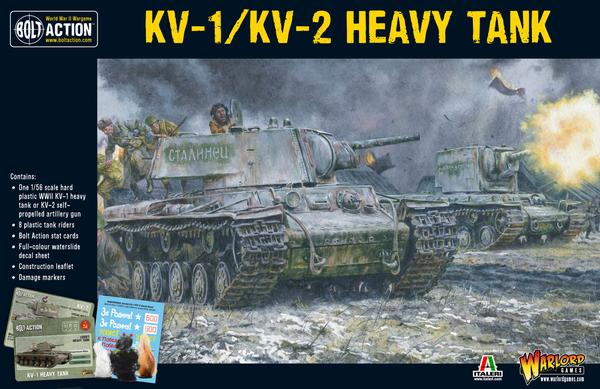 If you play Russian with Bolt Action, then this is the box set for you. Not only can you expand your heavy firepower you can also expand your troops. This box set comes with 8 plastic tank riders, also in the box is a guide for constructing your KV1 or KV2, handy reference card for each type of tank, damage markers and a set of decals for the KV tank. This set really does come in at a good price of £20 and at time of writing is in stock on the website.

The KV1/2 plastic box is absolutely crammed packed with the might of mother Russia:

The KV-1 is a huge monster of a vehicle weighing at 45 tonnes it was one of Russia’s first heavy breed of tanks used within the second world war, it was famed for it’s near impregnability. The German anti-tank weaponry of the time had nearly no way of penetrating its armour, only the lack of training and manoeuvrability allowing it to fall foul of superior German tactics.

Their size allowed KV-1s to literally crush anything beneath its giant treads, firing lines and encampments were abandoned on the sheer sight of it. The 76.2mm cannon still punched through any of the current German armour, so during 1941, it was nigh-unstoppable.

The KV-1 set the example of how a heavy tank could or should be, nearly indestructible and to cause terror in their enemy. Over the following years it did fall out of favour, but it was used as the base for the next generation of heavy tanks.

Developed to be used in conjunction with the KV-1, the KV-2 was developed for close support against infantry, guns and bunkers. Just like the KV-1 it was very heavily armoured and boasted an even greater size with a height of 12 feet(4 meters)!

Armed with a huge 152mm howitzer they primarily became bunker busters, with an operational range of 140 km or 87 miles, you’ll leave any enemy quaking in their boots wondering if they can hold out against such a barrage.

Use on a flank to distract your opponent or lead an assault supported by your tank riders, either way your opponent will be quaking in their trenches!

Hold back and pound the enemy, re-position and open fire again – nothing will survive a few direct hits!

++++++BEGIN TRANSMISSION++++++ Part I Welcome back to part two of the The Adeptus Mechanicus Project, for this update I have managed to build all the models that I bought for the army.

Announced yesterday is the newest offeing into the wartorn future