The Algoryn can now set up a command hub on a hostile planet with the new Drop Fortress from Sarissa Precision.

Every planetary drop in a capsule is a risk for the troopers inside, a risk of it going off course, getting damaged or being completely destroyed by hostile fire such is the life of an AI Trooper.

Aeons of experience in warfare has allowed the Algoryn to advance their technology resulting in the development of the Drop Fortress, comprising of four drop capsules that upon landing expand to becoming one large fortress. The Algoryn can then use the internal transmat in relative safety to deploy from orbit into the prepared defensive structure and dominate the battlefield.

A large central hub is connected with three smaller bastions, via two small and one long walkways which are protected with a large kinetic shield. Each bastion has an outlook on the top for guards to challenge any threat that dares to try and take the base. The roofs of each bastion and main hub are easily removable to show brutal close combat.

With the doors in the open position there are clear fields of fire through the building and although it seems like it may block your view of the battlefield you’d be surprised how the angles allow for more lines of sight than you’d expect. 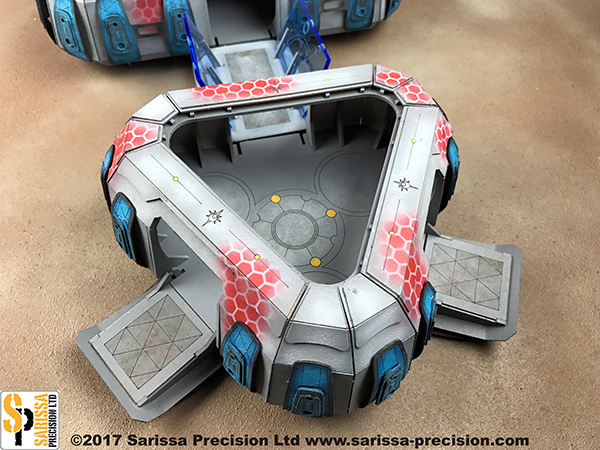 LOOK AT SOME PREVIOUS RENDERS!

During the development process great care was taken by Sarissa to include extra details in the design, including internal transmat pads and cool details to give the exterior a a definitive Algoryn shape – more than you might expect from flat MDF and card. It can also be stacked one on top of another to create a commanding tower objective.

About Darren 519 Articles
An on an off gamer for twenty years, but in the last few years has spun away from his favourite Dark Angels and is loving the new found versatility and variety in the miniature universe
Website

Christmas has come a little bit late but thanks to Warlord Games its here! The Algoryn war machine builds up its power base with the brand new Algoryn AI Armoured troopers plastic box set:

Whilst at Warlord HQ a few months ago I picked up (literally) the only piece of Test of Honour scenery they had in stock which was the Shop, I know the irony of buying a […]

July 23, 2016 Darren Battle for Xilos, Beyond the Gates of Antares, Campaign 0

CLICK HERE Come and join us for Episode Five of the Battle For Xilos Campaign where the forces of Warlord Games’ Beyond The Gates Of Antares clash in this epic struggle. The Slave Pits are […]