Well yesterday I may have done something slightly crazy, in fact it was so crazy I didn’t realise just what I was letting myself in for, it takes biting off more than you can chew to a whole new level!

The first thing I did was pencil in four dates for my Guild Ball tournaments that I run at Athena Games in Norwich next year, these are waiting for the final go ahead subject to work/childcare arrangements. I did the four events this year and although they are relatively straight forward I would like to get to play in at least one of my tournaments this year. I shall be running my Union as normal and just have to digest the new season 3 stuff as well as stripping all the models I need and repainting them as after two and a half years they are starting to look a bit jaded.

The second thing I did was to agree in principle to go along to Mantics open day which is no chore what so ever as long as I can get a lift up to Nottingham which shouldn’t be to hard, the silly part comes as the day after the event they are planning a pathfinder day and that could involve a lot of building and painting, but I have till may so that’s possibly not that bad.

The third and final act of craziness was to agree to take part in Norwich Clash of Kings tournament, which I thought wouldn’t be to bad as I already have nearly a thousand points of Forces of the Abyss made I just need to finish painting them up and base them, then I found out it could be 1500 points, again not to much of an issue only a few more units are needed all off which are sat at home in a cardboard box from the last kickstarter, then I got told it could be 2000 points, well at that point I really started to sweat as that now means on top off my normal work for the site, I have a lot more models to build and paint, as well as getting a few practice games in. 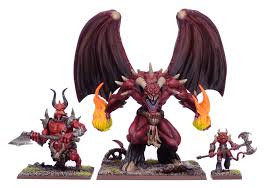 My final act of insane craziness was to start looking for a Warmachine tournament to attend locally, unfortunately on that one I haven’t been successful yet in trying to find one that fits in with my schedule!

Mantic Games have announced that the Terrain Crate 2 Kickstarter launched 8pm (GMT) on February 21st. We’re expecting great things from this campaign and there will be a special 24-hour early bird discount. We should hope […]

Wild West Exodus 3rd Edition is coming in October! Thats tomorrow! OK its sometime in October and probably as late in the month as you can get without it being November but it is still […]

Breaking news from Bethnal Green and the Mantic team; In addition to the Kings of War and Dreadball tournaments, Open table Deadzone, and Walking Dead introductory games, Mantic will be bringing members of the design […]