You may recall me speaking about the Black 13th a unit for the Cygnar force, we have another for you, The Stormsmith Grenadiers,

As I am still short of the starter set I havent really got much in the way of referencing these guys to other Cygnar units, but they look great, its a shame they are in metal and not resin but the go together reasonably well if you can find a good reference picture to work from, I suggest the one above, to try and get the right arms on the correct model. 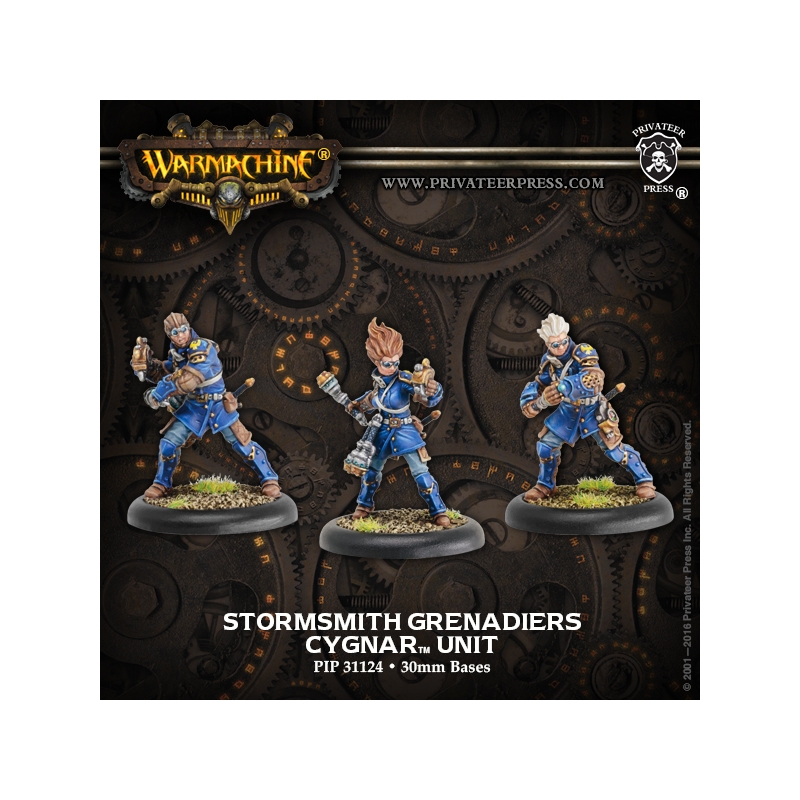 So they are a bit cheaper than the Black 13th and have the same amount of models but they are a lot more fragile, in terms of melee and movement they are about the average for a human by the looks off it, a reasonable ranged stat and pretty good defence could see the Stormsmiths surviving long enough to be a nuisance combined with a special rule that gives them +2 defence against ranged attacks taking them into Warjack defense level territory, being grenadiers there range isn’t as good as those models with a rifle of some sort but still a 6 inch range gives these units (you can take two off them) a 12″ threat radius.

The real strength, and this seems to be the same as all Cygnar units I have the cards for, is the grenades have multiple attack types, as with the Black 13th and the Arcane Riflemen you get a choice of three types of attack, you can either go for an Area of Effect hazard that stays in place for one round, an attack that slows down the targeted model, or a Vortex style attack, being a new player I can’t really see the use of an attack like that but I am presuming that you can force the order of your opponents next activations in some way or maybe even drag a model out of cover, or even into an AOE, actually the more I type the more that I can see this attack can be used for all sorts of shenanigans.

At the moment without a warcaster and warcaster battle-group I am relegated to hypothetical commentary at the moment but hopefully that will change in the near future.

New Releases for Febuary from Freebooters

Freebooters Miniatures today announced the next wave of thier releases. Swallow is the last of the new characters for the ELTC from the Tales of Longfall 2 – Corporate Piracy expansion. As a Mercenary she fights […]

Hi all, this week I’m giving the sci-fi battle game from Anvil Industry a little more thorough a play and a somewhat more informed decision on it’s longevity and all around goodness…

Wow, the 14th instalment of Learning Curve is here already.  It’s been fun so far and I hope you’re following along with my war games education.  I’ve learnt quite a lot this week and had the pleasure […]