So Dungeon Saga by Mantic Games has been out a while and even though I have the game and all the add ons etc, I have yet to write about it. 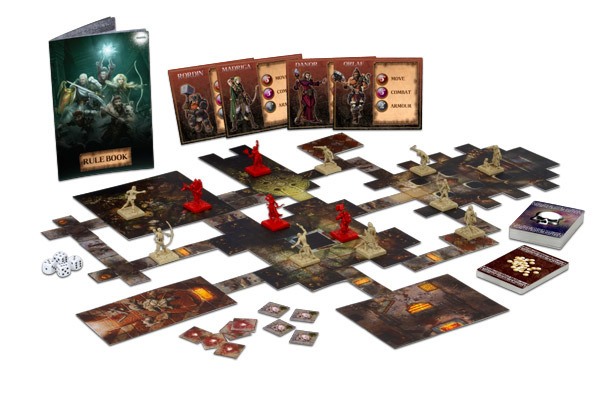 Over a thousand years ago, Valandor, the greatest known hero fell in battle, fighting to protect the lives of those around him. From shore to shore, all owe thanks to his wondrous legacy. Now, sacred sites across the land have been defiled and plundered by the disgraced wizard Mortibris, who along with his vile undead minions will stop at nothing to obtain the secrets of Valandor’s power. Only the bravest heroes dare oppose him. Thrown together from the far corners of the realm, they step boldly into the depths, ready to face whatever foul evil awaits them…

Up to five players can embark on a fantasy adventure with Dungeon Saga: Dwarf King’s Quest. The single piece (with the exception of one) miniatures are classed as highly detailed game-pieces and are good to go straight out of the box. The rules are fairly straight forward and presented in learn-as-you-play pamphlets, the original set contains everything you need to transform your tabletop into a deep and immersive world of heroes and monsters. Play a single game in just 30 minutes, or combine the carefully composed adventures for countless hours of classic quest gameplay. When the fate of the world hangs in the balance, which part will you play in the epic Dungeon Saga?

In a game with two or more players one player takes the part of the evil dungeon overlord with the forces of evil at his command, and the others divide the mighty heroes between them. Each hero has strengths and weaknesses and teamwork is the key: The mighty barbarian can slaughter many foes at a time, yet he is lightly armoured and vulnerable to strong enemies. The Dwarf, on the other hand, is steadier as his thick armour can resist most attacks. The Elf is not as skilled a fighter as either of these, instead preferring to stay at a distance where her finely-honed archery skills can best be used. Finally, there is the wizard -the others may laugh at his lack of fighting skill, yet it is often his magic that carries the day. If the others can keep him alive, that is.

In a game with just one person the player takes on the role of the heroes whilst the forces of the evil dungeon overlord are played out using a predefined set of rules I have tried this once so far and it seems to work ok, running the rules for a single player game is an entirely new way of thinking for a designer over a two player game as it still has to be engaging for the player, but the player knows exactly (or can work out) exactly what moves the AI will make.I think I might dig this out of storage for a while this weekend.

About Darren 535 Articles
An on an off gamer for twenty years, but in the last few years has spun away from his favourite Dark Angels and is loving the new found versatility and variety in the miniature universe
Website

Spring is coming ! It’s time for battle and slaughter. It’s time to conquer this lovely but not so strategic hill. You know, the one with the picnic table on the top. Like every year, […]

If you haven’t heard, dead zone has been run through the Kickstarter mill again, but came out the other side a better game. I’m going to take a look at some of the changes and […]