If you like lots of different fantasy race’s, and you like pairing them with different special powers, and you also like trying to fit said races into a overcrowed world….Then Smallworld from Days of Wonder is the game for you!! 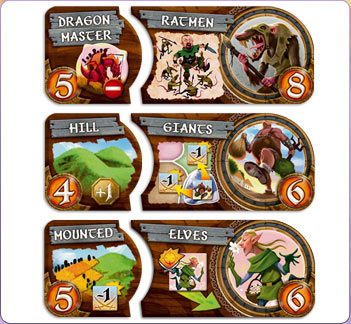 The idea for this game is simple, five different races are available too you at the start of the game, these are picked out of the deck of 14. Paired with these are five different special powers that have again be chosen at random out of a deck of 20. They are placed on the table in a ladder style with the decks at the bottom of the last pair. If you want any other race than the top one you have to place a coin, going down on each one above the one you pick. 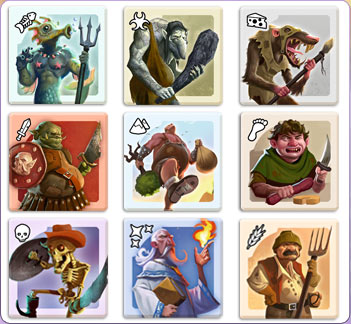 Now that’s the hard rules over with now comes the world domination! But like most things, you have to start small, well, not really in small world, you see the numbers on the bottom corners of each race and special power, that’s how many tokens from each race you start with. Most races won’t grow any more, in fact only a few will, so you have to capture as much land as you can before your race starts to go into decline.

That might sound harsh, Halfing’s going into decline, but the good news for you is you can buy another race. The object is to collect as much coins as you can by taking land, each land will give you a coin at the end of your turn. But you might have a special power that gives you two coins if your in the hills, and your race might also give you more coins if you have turfed out another race from that area. No only are you a Hill Orc but your on your way to getting this game. Max out the races and special powers for super combos and then rake in the coins for the win.

Days of wonder have loads of expansions for this game, mainly different races and special powers, but it’s worth having a look to expand it after a few games. The only gripe is that’s its five players out of the box and you have to pay for a six player board as an expansion, but you can flip it over to play Small world Underground, one of the expansion games, as six players as well.

This game is really worth the money, each time you play it you will get different combos of races and special powers. So the game can be played over and over again before you even need to look at expanding it. With lots of parts in the box, different boards for smaller sized games, and the fact that each player gets a cheat sheet with all the races and special powers on it,to keep the game moving along nicely, this game is a must!

Interview with The Noble Artist – Creator of Hero Master: An Epic Game of Epic Fails

We certainly have quite the treat for you today, readers! There’s a chance you might have missed our previous coverage of Hero Master: An Epic Game of Epic Fails. Well, we’ve had a lovely chat […]

Pocket Landship is a solo and/or co-op card and dice game. The game is set in an alternate version of the 20th Century pitting tank commander(s) against a horde of opponents. It’s already funded via a Kickstarter campaign which ends today! […]

Announced today is a new box set from Games Workshop, Lost Patrol. Moraz III – a deadly jungle world filled with danger and fear, populated by ferocious aliens who wait in the undergrowth to pounce […]