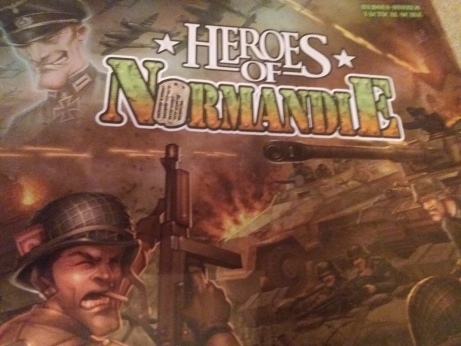 Hello again fellow mortals.  This week in my journey through the games I play we’ll take a look at Devil Pig Games great Heroes of Normandie!  Since they’ve just launched a iOS version it seemed like a good opportunity to dust of the table top version…

I own a few bits, the base game, commonwealth army box and the 21st Panzer Division which gives a good enough variation of battles and forces that I’m yet to be bored with it.  The game itself is sort of like a wargame-meets-boardgame.  It’s a hard and fast WWII battle game with a clear focus on heroic actions like those seen in the movies.

All the boards are modular which gives great variance in playing area and they all have nicely clear and specific rules on how the terrain behaves.  Likewise all of the rules you need (pretty much) are found on the counters that represent your fighting men.  All your actions are determined by six-sided dice and so the core of the game is really very simple.  You move your squads and attempt to blast the enemy before they blast you back.

Obviously there’s a little more to it than that.  Tactical use of scenery and the forces at your disposal plus the cards that can suddenly crush your opponents hard won plans.  Key to the strategy is the element of bluff and planning in the order you’ll activate your units.  Place your activation tokens in the wrong order or get blown out by a cleverly played card and suddenly your whole turn may lay in tatters!

The heroes are epic, the tanks are great and really hard to explode and the curiously difficult to dispatch infantry squads are the real key to success.  We’ve only played for fun but in that regard the game delivers in spades.  We’ll never forget our campaign night where Market Garden was a success and the US infantry stormed the machine guns of the Third Reich to end the war before Christmas after all!  The beauty of the game for me is that it really is complicated and deep enough to have a great time but also easy enough for non-gamers to enjoy it.

We’re going to play a bit on Friday I think and I might even be tempted to get Shadows Over Normandie as well…  Until next time happy gaming! -Mark

Does Beastgrave improve Warhammer Underworlds? I’d certainly say so. Is Beastgrave enough to breathe fresh life into the game? To reignite the flames in the “ultimate competitive miniatures game”? That, I cannot honestly answer currently. Time will tell… […]

Hello again everyone!  This week I’m going to do a quick review and hopefully a useful tip or two on making a seasonal show on your figures.  This follows on from my look at snow […]