Welcome back to my weekly(almost) run down of what I’ve learnt about playing games!  This week I’m talking Infinity the Game by Corvus Belli.  Any of you who’re following along with Sunday Colour will realise that I detest playing with unfinished figures so I made a special effort to ensure that my starter set was finished in time for the games.  My force was ready, the table was ready (many thanks to TinyWargames for the mat)  but was I?

By and large I think the answer is yes.  The game does have an enormous amount of rules and weapons, stat-lines and different troops but it actually wasn’t as complex as expected.  Part of the reason was we deliberately started small, using only 140ish points each and noting too difficult.  I would highly advise this way of starting to play any game as it lets you cement the core rules in place before worrying about synergy and all the other flutes and whistles.  Some games get this wrong IMO by being too complex even at the core level (I’m looking at you Guild Ball) but Infinity seems to hit the mark pretty much spot on. 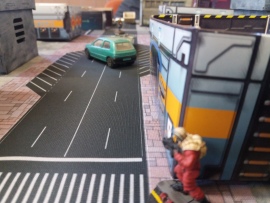 The main things that I learnt are that you should always choose the automatic reaction order (ARO) based upon the best odds for survival and if moving is part of that.  It’s easy to just shout shoot all the time but sometimes dodging is better, particularly if you get to move your figure to cover another angle or just put her out of sight.  The other thing is that facing is really important as more than once our soldiers died as a direct result of us facing them just slightly the wrong way so they couldn’t protect themselves.

Dudes die really quickly and all of the guns in the game are plenty lethal enough to take out light infantry so I’m still keen to keep my Haqqislam on track as a light infantry force to keep numbers up but I may invest in an engineer to help out with objectives.  I would be very keen to try out a more elite force at some point and also a fully-camo infiltration force but I’d better finish painting the fellas I already have before I start on any Morat or Ariadnian forces.

I think it’s a fair assessment to say that I really like this game; it’s fast, slick and you’re genuinely always involved in the action.  I think that as long as I stick to a steady pace with learning the game it’ll definitely become a big favourite!  Next week I’ll be talking about the Marvel Universe game from Knight Models so stay tuned! -Mark

Hello again!  An update on the status of my model mountain is this.  I have painted zero figures.  I have purchased six.  I was given a box of Goblins.  I think I might be some […]

Hi all!  I’ve been seeing an awful lot of crazily good paint jobs for this Armies on Parade malarkey and figured I’d get in on the act in a slightly worse fashion!

Ooooh unlucky for some!  Hope not.  This week I’m going to be looking ahead slightly to try and figure out what to invest my time and money into over the next few months.  I always […]