Hello and welcome back to my on going attempts to learn how to break into, start collecting and then hopefully playing the game.  This week I’m going to discuss Burrows and Badgers because it’s a game that I really enjoyed painting up and I think looks great at least.  Since the rules are available from the website I’ll be pretty open about discussing the rules and my thoughts on warband construction!

So the biggest selling point of the game is definitely the figures themselves because I think they’ve got something really unique going on.  I’ve seen a lot of people buy the figures to use as Frostgrave miniatures but I think the game itself has a lot to offer.

The rules seem pretty straight forward and combat works by making opposed rolls with differing  sized dice.  The system benefits creatures that have better characteristics obviously but the little guys get a better chance of scoring a ‘perfect’ roll and getting a hefty bonus.  In the attack this hugely benefits larger creatures such as Badgers and Hares whose larger dice give potentially the better score, especially since your greatest chance of perfect is 1 in 6.  So I think having a couple of quite beefy fighters is probably key to the success of the crew.  I’ve gone for a hare and a fox that shore up the attacking element of the band. 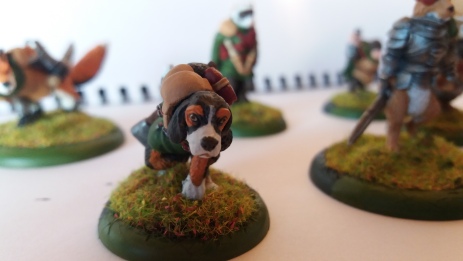 A lot of the scenarios in the book require various skills though and it’d be a shame to lose out on some of the other smaller creatures skills.  To make a more rounded party I’ve chosen a hound and a ferret whose all round skills allow them to form the ‘jack-of-all-trades’ core of the band.  They are less sturdy than the hare though so I think of them as counter attacking skirmishers objective grabbers and hide-go-seekers as required.

The other two are a mole and a marmot, both of whom have quite sub-par stats but that can work in their favour.  I’d say they’d be best used as defensive guards.  My competitive mind actually thinks I probably boo-booed when buying the figures though and should have gone for royalists to make use of the extra pennies… 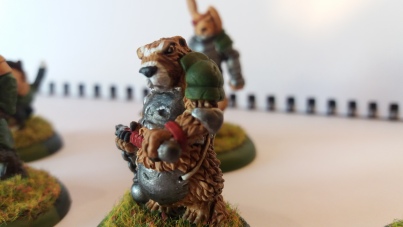 Especially because when it comes to buying weapons you can quickly double the price of your fighter.  Armour especially is a big investment and the thing I’m least sold on really.  Certainly as a ‘for everyone’ deal.  The bonus is nice but another ranged weapon user might be better, possibly even a magic user since some of the spells are a bit crazy!

Given the fact that I currently only own the six figures I’ll go with armour for most and decide what to do once I have a few games under my belt but I think that going Royalist to get some more pennies to spend on face-smashing guys might be one option or dropping the armour on a couple of the lighter fighters to gain a mage might be another.  Of course both options will mean having to buy some more figures but that is just the price I pay for being such an intrepid gatherer of intelligence…

Thanks for reading!  Next week I’m hoping to finish my infinity starter and actually have a go at it! Until then stay lucky! -Mark

So if you haven’t been under a rock then you’ll have seen the first Plastic Primarch.  Magnus the Red in Daemon Prince form…

Learning Curve: A blast from the past Urban War!

Hi this week I had to go into the loft!  Scary lightless land-above-the-rooms inhabited by spiders.  Plus no heating.  Brrrr.  Anyhoo whilst I was in there I stumbled across some figures I painted a few years back when […]

We did start the fire!

As the title suggests the people’s favourite was Synthien Burn!  That’s great because nobody want’s to be a super-human warrior with a jet-pack anyway right?  Sounds boring to me too…