Last week I wrote about the difficulty of choosing a force and then the occasional issues that arise with particularly fiddly figures.  The next thing on our list is choosing colour schemes and painting the blooming things.  After that we can see what clever stuff we can squeeze into our points allowance!

So how do we choose what colours we want to put on our dudes?  Well you could use colour theory and do a whole load of reading to understand it or like me you could cheat and get someone else to do that work for you!  A great source of brilliant colour schemes are a) other people’s figures b) comic books and other works of fiction and c) history.  Now this in itself can present the issue of too much choice.  How I get around that is I look at the figure and try to decide what or who it reminds me of, for example I painted my Afterlife figures as Deathstroke from DC comics because they reminded me of him in the Arrow series. 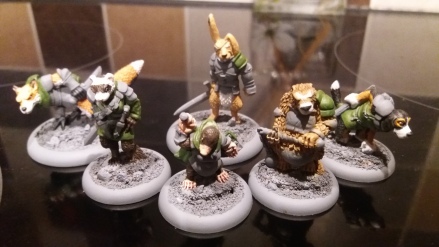 Once you’ve decided you’ll want to paint them but there are an awful lot of choices on this front.  There are two very good options for speed of painting that give decent effects but are obviously ‘quick jobs’.  I prefer dry brushing and dipping whole figures when I have a large amount of figures that are probably not going to last that long on the field.  When I have a smaller amount I go for a slightly more neat and crisp look for sci-fi and a warmer slightly more rounded off look for fantasy.  How you paint is as much a tool as the colours you choose.  Also sometimes the little details are important, I have chosen to paint the eyes on my Oathsworn miniatures in a very human manner for example to give them personality whilst the Mirakuru Corp are very faceless in aspect.

Anyway regardless of all that at some point we need to select the force we’re going to take to the table and that’s what I’m going to start to talk about next week because it’s a vast topic littered with pitfalls and inequalities.  All games are different but one thing is certain not all choices are as good as others…

Until next week, happy hobbying -Mark!

Welcome back to my weekly painting diary.  This week I’m going to delve into the methods I use I use when I’m not speed painting and the products I’ve been using.

So if you haven’t been under a rock then you’ll have seen the first Plastic Primarch.  Magnus the Red in Daemon Prince form…