While I have some time to batter away at the keyboard instead of running around doing all the things that normally make up my day I thought I would take five minutes to talk about Steam Forged at Salute. 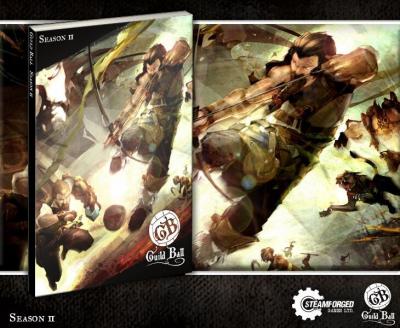 Firstly Salute saw a whole batch of new pre releases, if you were able to get there you could have got the entire hunters team and the new season 2 rulebook, as well as this years show model, Flint, and some new dice as well.

Other than the massive selection of stock and the many display cabinets that were on the stand, one thing stood out to me, and that was the demo stations each one a raised plinth with a pitch, teams and all the accessories to play, it just looked brilliant, added to which there was a constant stream of day glow green t-shirts pouring their souls onto the table, these guys were the pundits who gave up a portion of their day to demo the game to people. I am sure their hardwork paid off as the retail section of the stall was pretty packed. Some stalls towards teh end of the day start to quite down a little bit as people start to drift off, but when I eventually saw Matt (Sorry Richard I saw you once throughout the entire day and you were busy) and his Chief helper at large Jay which was very late in the day there was still people lining up for demos, judging with my experienced eye and a smattering of guess work, if footfall=gamers=cash then Guild Ball players across the UK should be looking forward to a few new players very soon.

Another small part of the Steam Forged stall was a vey small release which is currently on kickstarter at the moment. That would be Dark Souls. The popular computer game is being brought to you from Bandai to the tabletop. Dark Sould has in the last few days already smashed the one million pound mark thats £1,000,000 and is still going strong with a little under four weeks to go.

This looks great and could be a second run away success for Steam Forged, after a few shakey moments last year they have learned they have expanded and they are moving forward, they see a challenge and they aim to break it, not only is the company great and releasing new stuff at a steady rate, they have a huge player support in the form of their Pundits program, which fosters a great sense of loyalty, which translates into enthusiasm on the ground, which translates to more players. This shows in the kickstarter as it has already broke the million mark and eclipsed the £737 made by last years favourite.

Speaking at Salute there are plans to translate this support from Guild Ball over to Dark Souls all ready, ok probably less plans and more ideas but the thought is there, that’s how ‘long game’ the team is. Not only that but they are guaranteeing shop sales with unlockable stretch goals that are retail only, then publishing them so everyone can see what is going to be coming, a very clever move considering some shops wont sell kickstarter products although Element Games already has Dark Souls available for pre order.

Underworlds Direct Link
About Darren 552 Articles
An on an off gamer for twenty years, but in the last few years has spun away from his favourite Dark Angels and is loving the new found versatility and variety in the miniature universe
Website Facebook

The Walking Dead are here…!

A gentle rapping at my door has just announced the arrival of the Postman… and what looks to be a chunk of my Walking Dead Kickstarter from Mantic Games!

Courts of Annwyn – A new Kickstarter from Oakbound Studio

Following on from a recent small crowdfunding campaign to release the hedgepig pixie cavalry and a wulver, Oakbound are back with a new Kickstarter. This time round its the turn of the fae – The […]

Forge your own saga with Beowulf: Age of Heroes

This new Kickstarter campaign from Jon Hodgson and friends seeks to allow players to create their own epic tales. Whilst not a stand-alone game, relying on the Dungeons and Dragons 5e core rules, there appears […]