So a few weeks ago, litterally days before I left for a family Holiday I had a very nice package from Cool Mini or Not arrive. What might have been the very nice package? Well as the title of this post suggests its Wrath of Kings new 2 player starter set Honor and Treachery: Battle of Raven wood. 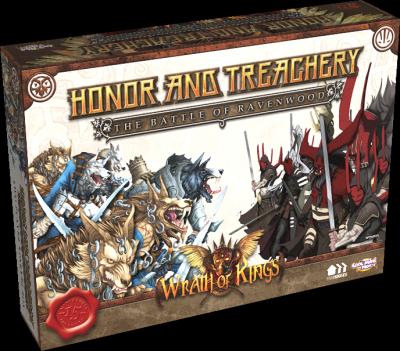 As reported on a few weeks ago the set contains 15 models from 2 factions, dice, rules, cards and terrain templates, the miniatures are an absolute breeze to put together as they only fit together in one specific pose for each model and the joins have interlocking sections, but there are a variety of different poses so every one looks slightly different, well as different as you can for a uniformed army.

The rules you get in the box set are not the full rules but instead you get a double sided sheet of A4 the front of which deals with the troop cards and what everything means on the card, whilst the second side can only really be described as a quick and dirty version of the game, don’t get me wrong, all the main parts of the rules are there, the game round, activation’s, combat and of course how to win, but its very much geared towards whats in the box only, but then this is  a starter set, and at available at a shade under £45 really is quite a nice if inexpensive way in to the game.

The two factions included are the Goritsi and the Nasier, which was a shame as I wanted to start collecting Shael Han, but thats just taking picky to the nth degree.

The models are well detailed and very easy to put together and look great, well mine probably wont, but the studio ones do.

Wrath of Kings will be being demoed at Salute so if you fancy a go then please go along I believe the demo is in with the Element Games stand.

Underworlds Direct Link
About Darren 549 Articles
An on an off gamer for twenty years, but in the last few years has spun away from his favourite Dark Angels and is loving the new found versatility and variety in the miniature universe
Website Facebook