On Tuesday the first expansion for Battle for Sularia will launch on Kickstarter.  Called Blood, Profit and Glory it promises to expand the game and create new opportunities and headaches for deckbuilders! 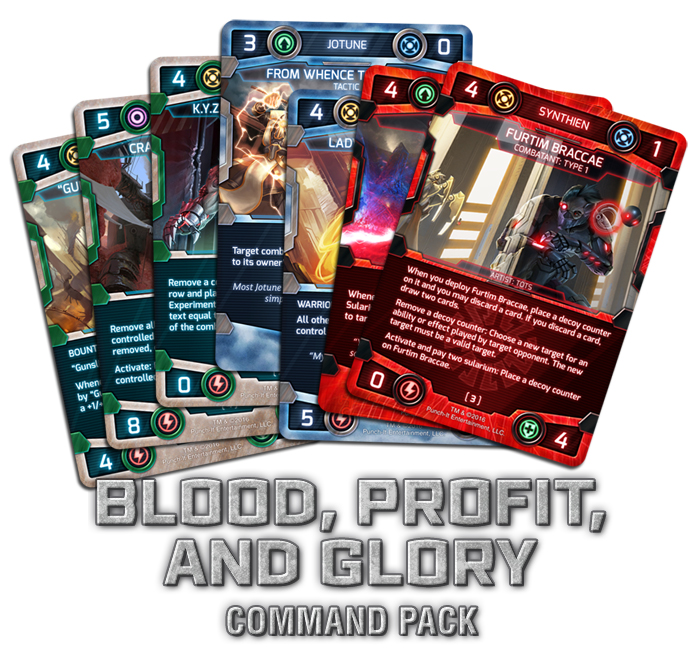 “Command Pack: Blood, Profit, and Glory introduces powerful new strategies, the keywords: BERSERKER, BOUNTY, and WARRIOR, and debuts 14 unique cards to be used in the Battle for Sularia: 4 Synthien, 4 Jotune, and 6 Mercenary. From powerful combatants to the means to achieve your schemes of victory, a full four card playset is included of each unique card for a total of 56 cards total in this expansion.” – sularia.com

I haven’t seen the pack yet (the editor has the cards and refuses to let them go…) but those that have been previewed look pretty awesome.  In particular I like these two for a Synthien deck. 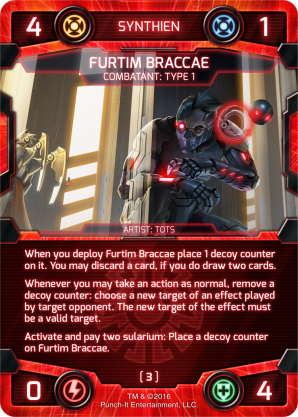 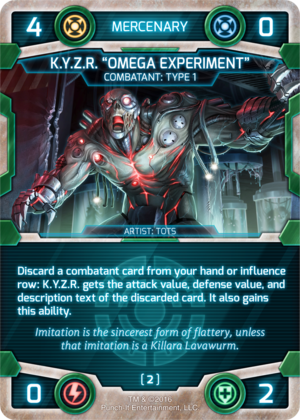 Firstly they both discard cards which is potentially an awesome tool for the future (I do like a reanimator deck!) and secondly they’re both a bit cheaty.   KYZR is pretty silly particularly because his ability can grant you a game winning bonus straight away.  He doesn’t become Animus Vox he just gains the +2/+0 which means that you can more safely run three copies of your ‘Type 1s’ and gain a sudden death monster.  You could of course just discard something enormous and win that way too.   Furtim is a griefer’s dream; card advantage and a virtually un-readable ability to redirect effects (most of which can hurt your opponents dude/site instead…) .  Seems worth running to me!

On the Jotune side of the field we see a trio of warriors, reducing the cost curve of Jotune at the expense of flight.  I really like that we get to see a more aggro style here.  It allows the Jotune to run some very cheap units that can quite quickly get out of hand large with Lady Worgana and Art of War in play.  Since most Synthien units at low cost are Sularium generators with little in the way of threat to these attackers we can start burning their sites early and keep ourselves safe from the wicked STAB.

Check out the card gallery below!

I really enjoy this game and think this little pack is well worth kickstarting on Tuesday!

Until next time happy gaming! -Mark

Test of Honour; a Preview

Mantic Walking with the Dead

Well it seems that not content with their own IP Mantic Games have gone and got themselves another licence. The Walking Dead, which apparently was a comic before it was a TV show, who would […]

Furthering our coverage of the upcoming Salute event I delve into the world of Sally 4th.  Makers of superb laser cut scenery and magnetic basing kits Sally 4th have some pretty ingenious ideas up their […]