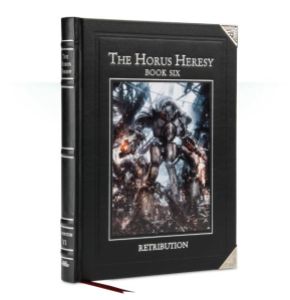 As many of you know I have always had a soft spot for the First Legion Astartse, the Dark Angels, ever since I started playing second addition 40k way back when.

The Horus Heresy Book Six – Retribution continues the unfolding saga of the Horus Heresy. As the fires of total war consume entire worlds and whole Legions clash, away from the front lines the Knights-Errant are abroad too, penetrating the warp storms that afflict the entire galaxy as they carry out a mission bestowed upon them by the very highest authority on distant Terra. The Shattered Legions pursue bloody vengeance against the hated Traitors, who in turn seek to hunt the Loyalist survivors down no matter where they might seek refuge. Blackshields – orphaned or outcast Legiones Astartes who have renounced their Legions and obscured their heraldry – harbour their own objectives, alone in the darkness, sometimes aligned with the Traitor cause, sometimes the Loyalist, but just as often for their own unknowable ends.

This book explores the unseen Shadow Wars that raged across the entire galaxy as betrayed Legiones Astartes mounted bitter campaigns against their former brothers, determined that if death was to be their fate, their betrayers would share it. This tale is told across five chapters, describing five very different Shadow Wars of the Age of Darkness. Also included are a detailed campaign system and a set of special Shadow Wars missions, enabling players to undertake their own series of linked battles fought between the types of forces explored throughout the book.

The Horus Heresy Book Six – Retribution is a lavishly printed, leather bound book. Its 297 pages contain a myriad of new rules, including those for combining Space Marines of several different Legions into a Shattered Legion force, and new Legiones Astartes rules for the Dark Angels, Blood Angels and White Scars Legions. 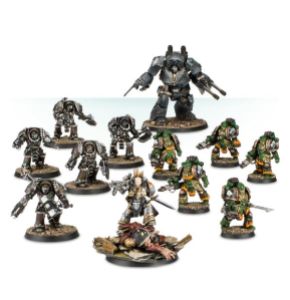 Rules are also included for the heroic and elite Knights-Errant, the renegade Blackshields, and numerous new Rites of War for each Legion. In addition to this, unit entries are included for new consul types, heroes and war machines of the Legiones Astartes, including the Legion Mastodon Heavy Assault Transport and Dreadnoughts of the Leviathan pattern and Contemptor-Cortus class. The Mechanicum also gain new characters and units including Anacharis Scoria and the Arlatax class Battle-automata.

This book can be used in concert with the Legiones Astartes: Crusade Army List, the Mechanicum: Taghmata Army List, or the complete collection of Horus Heresy books to fight the cataclysmic battles of the Age of Darkness. You will also need a copy of the Warhammer 40,000 core rule book to use these books.

A couple of weeks ago I posted an army list for my re-introduction to 40K.  I was set to take my dubiously skilled Night Lords into battle against the might of the First Legion piloted […]

On a whim I decided that I would join Kenny in the Shadow Wars of Armageddon. Now naturally being a Dark Angels player this gave me ample reason to buy some more miniatures.