So in my effort to cut down on games that I buy in to, you may remember my brief thoughts on it here, I may have accidentally planned to buy Dropfleet Commander and have brought the New X-Wing starter as well as the new release Heroes of the Resistance expansion pack, so you can see how solid my resistance is (no incredibly bad pun intended)! 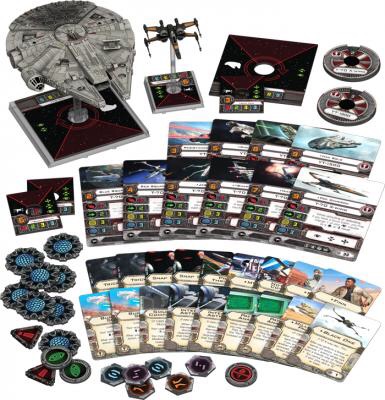 So being incredibly new to X-Wing I thought I would hit up some of my local players and get some advice for list building using only these two sets, now I was thinking I’d get a few washy answers or an endless list off stuff I needed to trawl eBay for, but other than a few card suggestions, one of which was to buy the original starter as well, one of the guys who plays at Athena (well actually two guys) gave me two lists

One thing that did come out of me asking for a few ideas is that some of the guys found it quite enjoyable working from a limited selection of ships and upgrades, so at least I have brightened up someones afternoon, even if only for a little while.

Hopefully withing the next few weeks I can learn some of the rules and get down to meet up with the local group and hope they take it easy on a newbie.

About Darren 524 Articles
An on an off gamer for twenty years, but in the last few years has spun away from his favourite Dark Angels and is loving the new found versatility and variety in the miniature universe
Website

Coming soon for Wild West Exodus. Warcradle have two new posse sets on the horizon. These are a great way to expand your posse forces, or indeed to start a new one. Pancho Villa’s Posse: […]

Quite a bit has happened in this week of second edition X-Wing! The first ever system open occurred, there were leaks, local organised play got going and FFG dropped a new wave! Alongside all this […]

Yesterday Warlord announced several special deals so lets see just what is on offer, please note these offers may run out/be removed/exdended as Warlord see fit they are nothing to do with us.