I was more than a little surprised after my last article on Trees was so popular.  If you’ve not had a look at the article you can find it here.

When I was asking the team about what I should do next, Darren was pretty keen that I do one on Asteroids.  I think he has some other project in mind that he’s after tips for.  Though as I have the Dropfleet Commander Kickstarter about to arrive soon I thought why not.

A lot of the terrain projects I do are very simple.  My hope is to get the terrain in a usable state on the table in a decent amount of time.  There are certain projects I spend a lot of time on, but most can be done in a few hours.

Materials wise this one is pretty easy.  Although you can use various forms of polystyrene be it the type found protecting washing machines or the more craft sytled Blue/Pink foam I went for Lava Rocks.  You can pick up bags of these for next to nothing and 3Kg of them cost me a mere £7 including postage and packaging from Amazon. 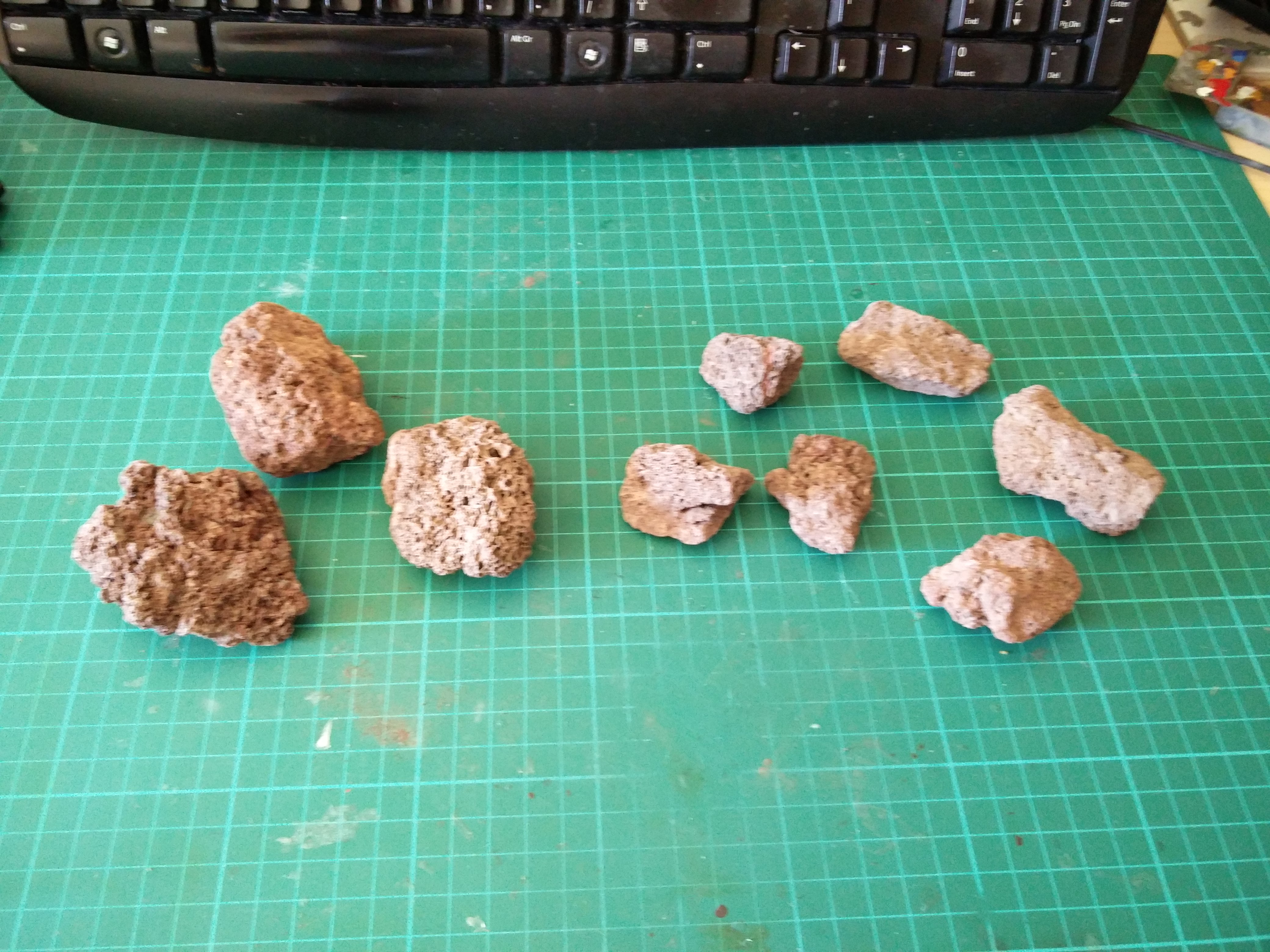 Lava rock isn’t something you can just easily put a hole into.  It takes a decent drill bit and some time to do.  Your best bet is to use an electric drill as its going to be a hundreds time quicker than trying to use a pin vice.  You will also need to, at times knock out the dust from the hole to keep going.  If you don’t do this, then it just goes nowhere.  I made the holes quite big so that the glue had something to bond onto.

Grabbing some old round flying bases I used the hot glue gun to fill the hole i’d drilled and then mounded the rocks on top.  If you were feeling super lazy you could get away with just throwing these onto the table.

Sadly I wasn’t feeling lazy.  Going the normal path, I undercoated the rocks black, though nothing stopping you going in a different direction.  After all, these could be parts of a destroyed planet so it can be made up of loads of different styles of rock.

Going the standard look I did two different shades of grey to get to a nice colour that I wanted.  I then decided to give the rocks some depth so I dry brushed in some very dark red (Vallejo Burnt Cad. Red) and some green as well (Vallejo Retractive Green).

Essentially that’s it, but you can do so much more.  Asteroids can be secret bases,  or they can be listening posts.  They can have debris on them from ships running into them or from crash landing.

I hope you enjoy the article and I look forward as always to your comments.

I really do think that 3D Printed Terrain is a direction a lot more of us will be going very soon, it has so much potential but I think It’s something I need to look […]

Legends of the Alliance – Review

Hi there, I’m Lee – I love to paint miniatures and play games involving them and have done for over 20 years now. I’m a part-time blogger over on http://2screens.wordpress.com and more recently have started […]

With my other Terrain articles I’ve been aiming for an end product that has some use when gaming.  So the Trees and Asteroids have a purpose, the piece this time doesn’t really have a purpose in […]