Ninja dice is just as it sounds, you are a ninja competing with other ninjas to see who is the best! To do this you have to enter a house with different traps and challenges that you will have to overcome, but be aware that the other ninjas are trying to steal treasure from you and delay you, increasing your chances of getting caught.

In this game you have to overcome the different challenges that the house will present to you. This is done by rolling the dice and trying to match your skills with the different threats that the house has rolled. One aspect of this game that I like is the use of dice facing and the placement of them after the roll, this has a big effect on the game and the interaction with other dice. So when you roll the dice some skill and restrain is needed to, first keep them on the table (I’m always the one whose dice end up on the floor!) and second, keep the dice so others might be in your dice arc.

Each round, the number of dice for the house is increased by one creating a higher level of difficulty each round. Each skill dice rolled by the Ninja could overcome different threats that have been rolled, the skill part here is matching these up in a way to help you overcome the house and using the fortune dice to full effect. The fortune dice will multiply any dice by four, so a dice that falls within the line on the fortune dice will be multiplied by four. This is a big help with overcoming multiples of the same house dice and of course if you have two fortune dice, these could stack to give you eight of the same dice or four each of two different dice. 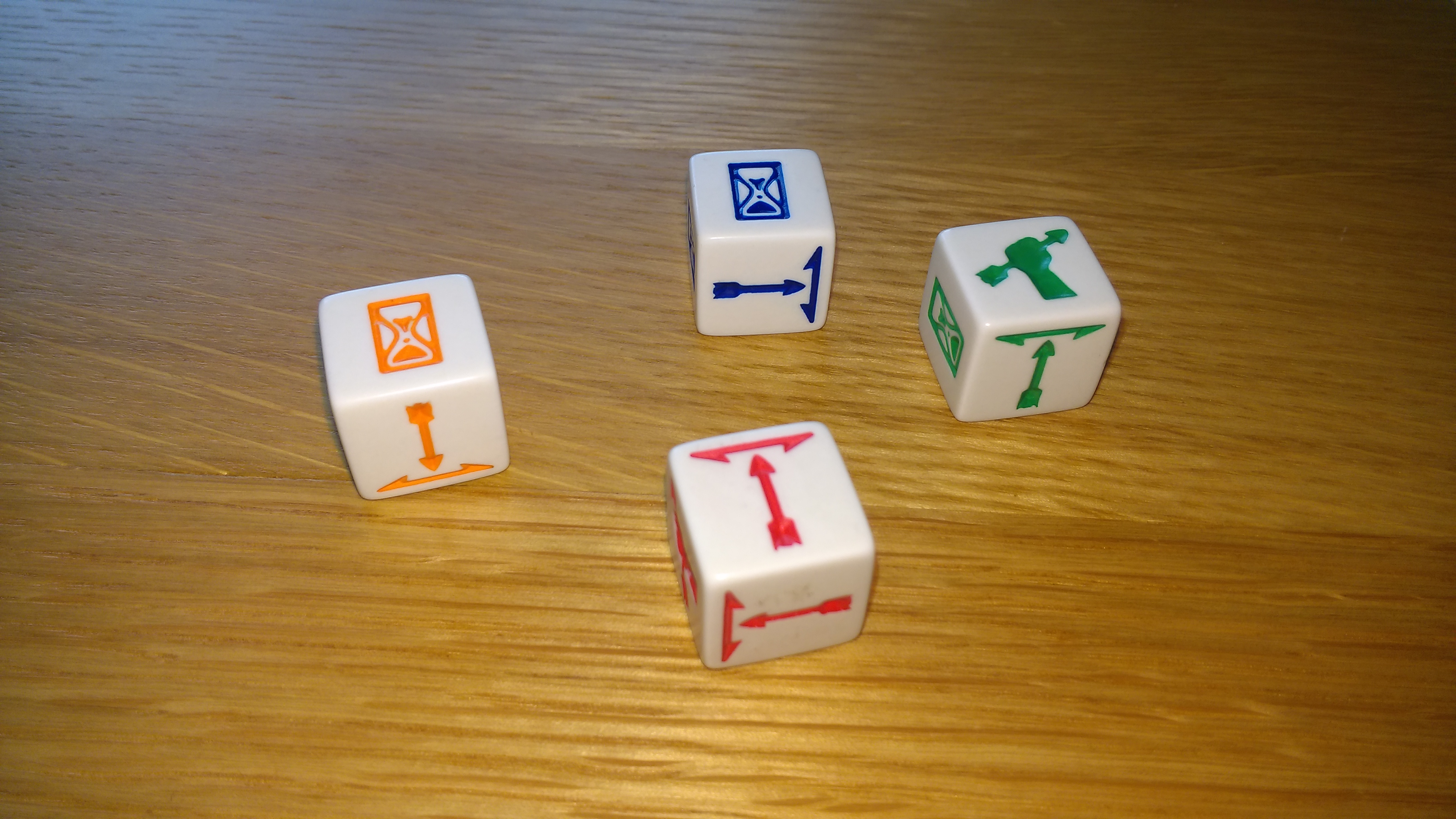 The other players are not idle at this part, each one will throw a dice when the active ninja rolls his skill dice. Should they roll an arrow, this could allow them to steal coins from other ninjas, but only if their dice falls within the front face of the arrow dice. Should they roll an hourglass, this makes time pass closer to when the active ninja will be caught. The active ninja now has the choice of re-rolling as many dice as he wishes but the other ninjas will roll their dice as well, creating more arrows coming his way or more time added on. 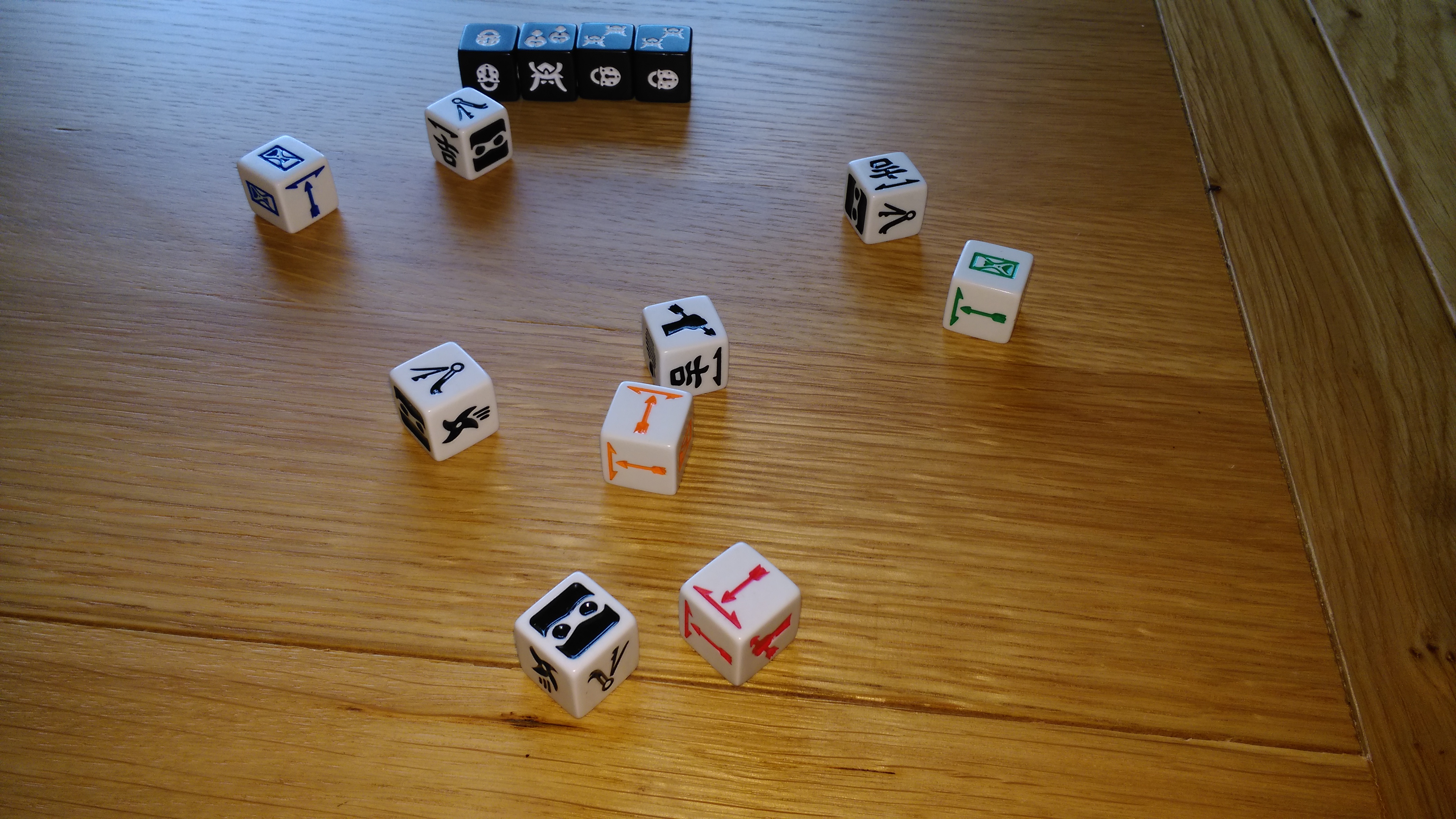 Of course if an arrow points at two or more ninjas dice then the player has a choice of who he can take the coin off. A block on any dice will stop an arrow and keep your money safe. If he feels that he’s pushed his luck so far, the active ninja can run away and take some of the pot of coins available to him, but if he holds his nerve and completes the house he’ll take the full pot and extras if he was able to defeat the house without throwing a punch. Each Ninja will have a new house rolled up for them and over the three rounds the house will get harder with the inclusion of more dice.

This game is designed for ages of nine up but could be picked up by younger players with some help and with up to five players this is a good push your luck dice game. One aspect that I really like is that thrown dice will have differing effects on other dice, depending on where they land. This means that players feel there is some skill in the throwing of dice, well my kids think so anyway. 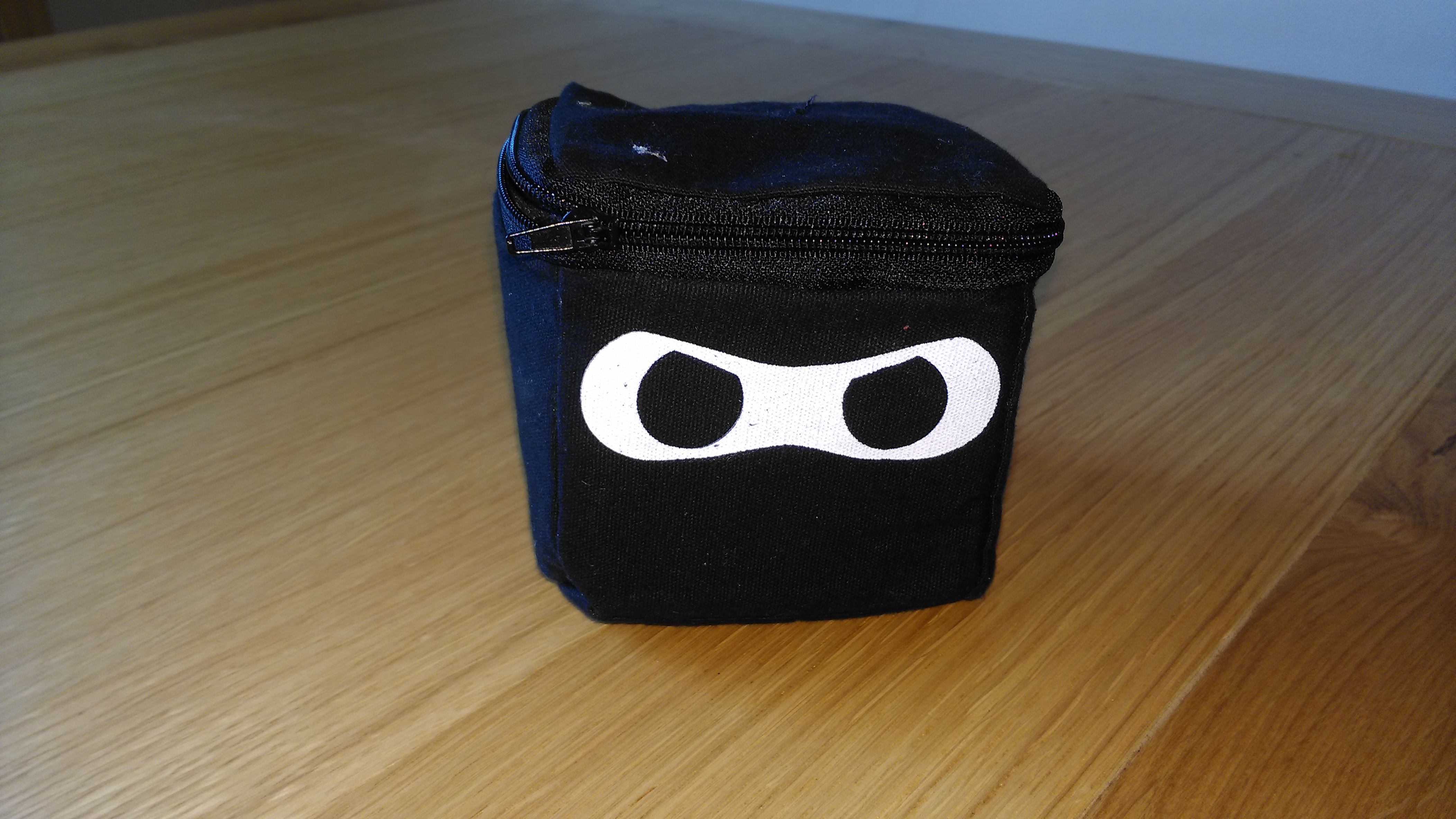 All the dice, coins and rules come in a nice little dice bag designed like a ninja, and looks cool as well. You should be able to find this in your local gaming store for around £20 and it is well worth the cost. If it’s a rainy days play or a lads night in, ninja dice will have you reaching for your ninja mask and pushing your luck to the limit.