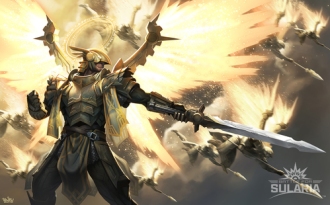 Those amongst you who have been paying attention will know that I’ve been looking forward to playing the aforementioned card game for some months.  You’ll also know that in my preview I got quite excited by some of the nifty things that go on during the game.  Well it’s here now and I’ve had a chance to play it…

Firstly I think it’s fair to say that I was pleasantly surprised by the quality of the product.  Awesome art, well designed cards and even a nifty little box to stow it all in.  The rulebook is short and sweet and the two sealed packs of cards are stacked in such a way as to present the player with two starter decks right off the bat.  None of this hunting around looking for this card or that card here. 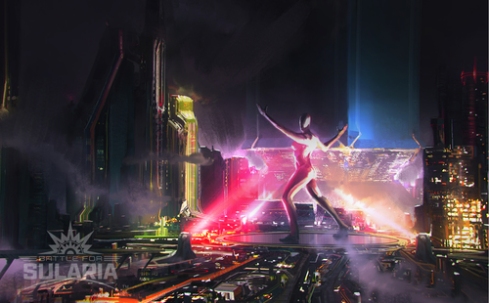 So it’s off to the races pretty quickly then!  We shuffled up, ‘randomly’ assigned first player (well I said I’d be first so that my opponent could see how it worked) and we started.  I think we got to turn two of game one before we had a rules discrepancy which I couldn’t find an answer in the little book.  In the end it didn’t matter because my God hand let me play Animus Vox on turn two anyway and that coupled with a slow Jotune start meant that game wasn’t long in the deciding.  Game two was much the same but with the roles reversed.  With our first session over I figured that we must be missing something so after work I printed the full rulebook.

With this improved tome to hand we played again.  This time both of us had a better understanding of what was required and of the tactics we could employ and the games were slightly longer and of much better quality.  Our play picked up quickly to the point where we were holding off slightly and the games were a much more enjoyable and hotly contested affair.

Several games later we’re both itching to do some deck construction to iron out perceived faults with the starter decks, adding some specialists to Synthien and putting Forge into the Jotune line up seem like good starting points to me.   I may slightly increase the Combatant count for the robots too. 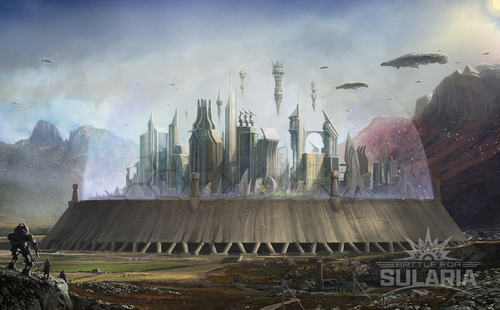 My conclusions about the game are that it’s easy to learn, fast and furious to play but layered with tactical nuance that an experienced gamer will enjoy figuring out.  Deck building is a tricky mix of finding combos and squeezing them into the points allowance, all the while managing the twin resources required to play the game.  The gameplay is slick and the action very rarely stops.  The only slight issues I have are that you really need the big printed rulebook to hand and that occasionally games can be quite one sided.  By the nature of the game once one side starts to get the upper hand it begins to destroy the others resource generation and victory quickly follows.  This can mean that games are over very quickly and sometimes it feels as if you’re kicking your opponent whilst they’re down.   This seems to be mitigated somewhat by player skill but isn’t wholly eradicated (so far).

All in all I’d highly recommend getting in on the action now and following it up when the kickstarter for the first expansion launches!  Great fun, tactical and excellent value all in one box!  Head to sularia.com for more information and great fiction plus news about the first expansion!

Welcome back to my ramblings about my experiences with games and the occasionally steep learning curve that we all must navigate.  Over the last two weeks I have assembled, based and started to paint my […]

A couple of weeks ago I posted an army list for my re-introduction to 40K.  I was set to take my dubiously skilled Night Lords into battle against the might of the First Legion piloted […]

Hi all!  Me again to talk about Infinity the Game.  You may remember that last time I wrote about it I got my butt-whupped in a close game.  If not then check it out here.  […]